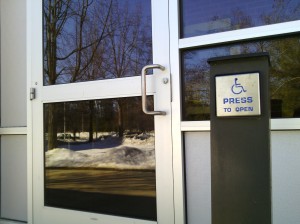 “How freaking stupid are you, Jeremy?” She stopped outside the glass door, wary of opening it.

“Look. It’s either this or nothing. This is better than nothing right?” He put a hand on her shoulder.

She shrugged it off. “I’m not so sure. There’s a button that opens the damn door. We’d probably be better off taking out chances out here.”

He cast a glance over his shoulder. “We’re as good as dead out here and you know it.”

“And if… when they get inside we’re trapped like rats with no chance of escape.” She watched the corner they’d come around less than a minute prior. “We need to keep moving.”

“Maybe the power’s out. Did you ever think of that?” He reached out and pushed the button. The door arced out toward them.

“Now what, genius?” Nervous energy coursed through her veins. “We should be moving.”

“They’ll be holding the door closed, even if one of them does manage to push the button. There’s got to be some sort of safety mechanism that won’t let it open if something’s in the way, right?” He shuffled on his feet and looked around. “I say we go inside and take our chances.”

“We can’t stay here. You already pushed the button. The door is hanging wide open.”

“Well we can’t stay out here either.” He stepped toward the door.

“Think about it. You barely had to put any pressure on that button. That means there’s an insanely high probability that at least one of things could have bumped into the switch and wandered inside when the door opened on its own. I’m not stepping foot in there.” She took a step backward. Her eyes drifted to the crowd shuffling around the corner.

“Then this is where we part ways.” He grabbed the door handle and pulled it closed behind him. He took a step backward and waved goodbye.

The creatures had halved the distance when she looked over again. She stood there waited for them. When they were almost within striking distance she stepped forward and pushed the button. She winked through the yawning door and bolted for the parking lot.

“You, bitch!” Jeremy shouted then clasped his hands over his mouth, trying to keep in the sound that had already escaped.

They undead were closer than she would have preferred, but at least a handful had taken the bait and gone inside the building. She found an odd comfort in that. Before the shit hit the fan, Jeremy had been nothing but an arrogant prick. Even after everything that had happened, he wasn’t much better. He deserved what he got.

She sprinted across the nearly deserted parking lot. Her lungs burned, but the added distance between herself and death was worth a little pain. She had to slow her sprint to a jog when she hit the other side of the lot, but she didn’t dare stop–she didn’t dare look back.

This post was written for my monthly Storybook Corner prompt. All are welcome, join the horde of lovely minions who take part.

Like Loading...
This entry was posted on Friday, March 21st, 2014 at 8:00 PM and tagged with flash fiction, story, storybook corner, zombies and posted in Prompt, Storybook Corner, Writing. You can follow any responses to this entry through the RSS 2.0 feed.
« Friday Fictioneers: The Apartment at the Bottom of the Stairs
Weekly Photo Challenge: Reflections »