Fairy tales and nursery rhymes may sound sweet and innocent at first glance, but a lot of them carry darker undertones. I’ve decided to pick a different one each month and give you the truly screwed up meaning behind it.

On the docket for this first edition we’re going to delve into the true story behind the tale of Jack and Jill. 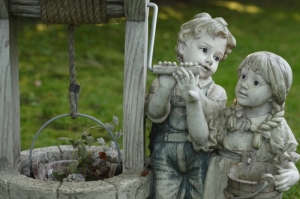 Jack and Jill went up the hill,
To fetch a pail of water.
Jack fell down and broke his crown,
And Jill came tumbling after.

This fun, little rhyme is about two kids falling down a hill while trying to get water, right? Wrong! There is actually more to this seemingly innocuous tale than that.

The “Jack” of the story refers to King Louis XVI. He was beheaded, by means of guillotine, on January 21, 1793. This came after he was arrested during the French Revolution for high treason and found guilty by almost all and innocent by none. Even though most found him guilty, only a slight majority condemned him to execution. He is officially the first victim of that dark time in French history known as the Reign of Terror.

The “Jill” in the tale is Queen Marie Antoinette, King Louis XVI’s wife. She was beheaded on October 16th of that same year.

Essentially meaning Louis XVI lost (broke) his crown first, and Marie followed suit. Good luck getting the image of their heads tumbling down the hill out of your thoughts every time you hear that peculiar little rhyme.

Like Loading...
This entry was posted on Wednesday, April 2nd, 2014 at 8:48 PM and tagged with creepy, jack and jill, king louis xvi, marie antoinette, nursery rhyme, origin and posted in Creeptastic Tales. You can follow any responses to this entry through the RSS 2.0 feed.
« Destination Weirdsville: Poland’s Crooked Forest
Friday Fictioneers: Bedtime »

15 responses to “Creeptastic Tales: The Origins of Jack & Jill”