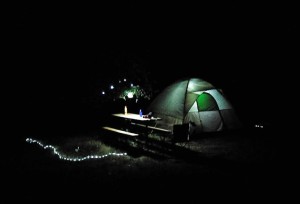 What had started as a tiny whisper, barely heard among the unrelenting hustle and bustle of his thoughts and aspirations had slowly grown—so slowly that he hadn’t even noticed, save for the occasional headache. As it’d grown, so had the whisper, eventually turning into a thunderous, agonizing roar. Michael could feel the awful thing camped out inside his head, at the base of his skull. Terminal, his doctor had called it.

He fled to the forest when the thing inside started stealing control of his motor functions. There in his tent, he left the world on his own terms.

Monsters come in all shapes and sizes. Some even sneak up on you and make your body their cozy, little den. I wrote a story last week too, but never got around to posting it. Not the first time. Probably won’t be the last either.

Like Loading...
This entry was posted on Wednesday, August 23rd, 2017 at 4:21 PM and tagged with camping, cancer, death, disease, drabble, evil, Friday Fictioneers, sick, story, suicide and posted in Prompt, Writing. You can follow any responses to this entry through the RSS 2.0 feed.
« Stopping for Fuel
His Greatest Mistake »